XChemical Member
November 2015 edited December 2015 in TVPad / BlueTV
I live in the U.S. and my parent use the tvpad 4 to watch HK drama and TV show to kill time. The tvpad didn't work even after I update the firmware to 5.0.60, so what I did was change the dns. The tvpad app store worked, but when I try to run any of the app it won't connect to the servers. I figure they must be blocking ip from the U.S. since the tvpad app store work that mean I can connect to something. I hook up another router just for the tvpad to use a VPN to connect, but it still didn't work all the apps still wont connect. This time I set the tvpad to manual ip configure the tvpad to the router that is using the vpn and the tvpad dns this is where everything worked fine the tvpad and all of the apps is working. 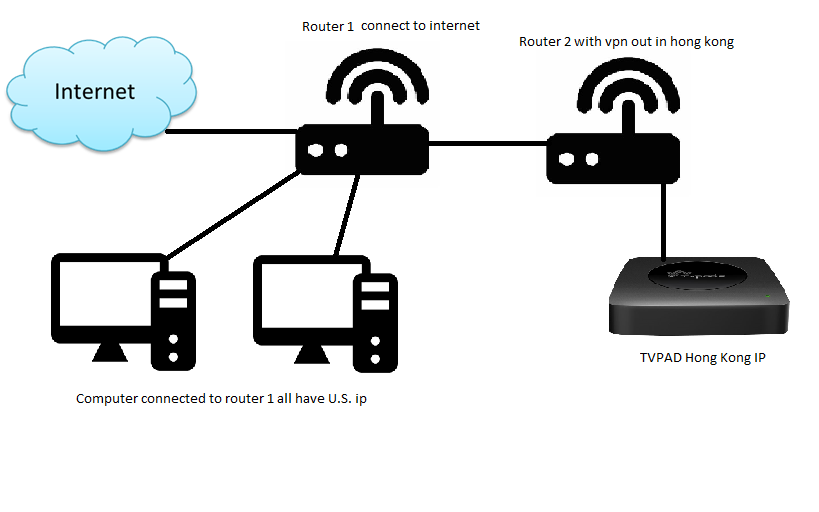 by: nick1sp
Okay, for people that wants to go with the VPN. You have 3 options. I only have a tvpad4, and using PureVPN so can't help with other versions.

1. use VPN software like OpenVPN, VPNgate, PureVPN, etc. Install app on tvpad and setup the software there. Read other forum on how to load non-app store apps.

2. use existing Router, yes, you don't need a second router. Basically made your whole home network on VPN.

3. use a second router and dedicated TVPad on that 2nd router. Separating regular home network and VPN network.


the way to setup vpn is very simple. You DON'T need to flash any firmware on router and DON'T need a VPN router. a regular router that allows PPTP is fine.

For those who remembers the early DSL craze knows what PPTP was, basically ISP company give you a username and password, and requires you to login in order to use the internet. So all router already have this function built-in.

On the Internet (WAN) section of your router, set your connection type to PPTP. enter the VPN server IP address, username, and password. and that's it. You're done. all your devices are now on VPN. you can check by going to google website. it will automatically switch to the country's google search engine.

what's the IP address network for the 2nd router? As long as it's NOT the same as the first router, anything is fine. Routers does not like the WAN and LAN to be in the same subnet.

If you don't understand any of these acronyms or how to setup a network, then good luck. You need more help than this forum can provide. Learn the basic network setup first before attempt fixing your tvpad.

Note: I don't suggest installing Vpn app in the tvpad for those who don't know much about technology, it can cause network problem in tvpad (example my parents). If you unplug tvpad or there is no power while vpn app is still running in tvpad, it will mess up the wan and lan connection on the tvpad. Making it unconnectable to the Internet. In order to fix this you have to restore the tvpad and reload all the apps back into tvpad. I suggest using a dedicated router for vpn so it limits this possibility from happening. There is also another method of setting Vpn for tvpad such as a dedicated raspberry pi or computer but those are more expensive and complicated. I also don't suggest to use any device that won't be dedicated as a type of router for tvpad because it will constantly cause the apps to not work properly.
Post edited by XChemical on December 2015
«1234567…11»

It looks like you're new here. If you want to get involved, click one of these buttons!